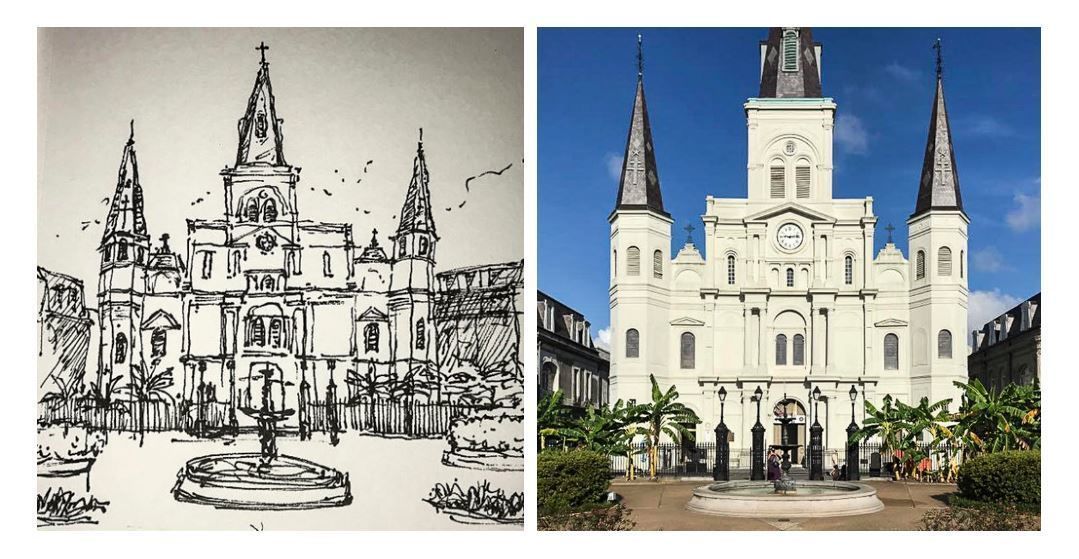 Posted at 13:47h in Featured by Jonathon Geels
Share

In recent decades, as churches have fallen into disrepair, their previously significant impact on community development has waned. While they certainly still serve as both social and spiritual centers, they do not dominate the landscape as they once did. The grid of city streets has reduced their hierarchical impact, and often, the Central Business District supports many buildings of much greater scale. Even the megachurches, with their thousands of members and sprawling complexes and campuses, are often sited away from urban centers, isolated on large swaths of land in suburbia.

Given such realities, it’s worth thinking about: What is the difference between space, place, and sacred place? At the intersection of sociology and geography, a space becomes a place through the meaning conferred on it by human interaction. This interaction happens both intentionally—in the design of spaces—and unintentionally—through the human experience of nature. Throughout history, sacred spaces receive their meaning through the programmed activities of faith groups or are given meaning by those groups because of their location.

The role of the spiritual spaces, formal or otherwise, has always played an integral role in community development, direction, and aesthetic. Their evolution from the primitive burial mound to the megachurch of the last 15 years has reflected and determined not only the spiritual (and often political and economic) direction of the community, but has also dominated the community’s physical landscape. As urban communities evolved, sacred spaces became more architecturally based, with less focus on nature, and more effort was made to connect spiritually through physical structure and art.

COMMUNITIES AND SACRED SPACES GROW TOGETHER
In the first century of the United States, spiritual structures served a significant purpose in the shaping of the communities they preceded. With many churches either evolving from missionary outposts or being one of the first structures in a new community, faith-based structures played a pivotal role in the way early communities were shaped. For example, take their physical stature alone: with the traditional high steeple of Christian gathering places, they were often the tallest structure for miles around and were sometimes the most expensively constructed structure in terms of materials and art. As immigration from various countries helped spur the expansion of the U.S., churches served as de facto community centers, which brought together people of common cultural ancestry and established support systems that ultimately aided in their integration to the U.S.

Sacred spaces, especially contemporary ones, provide immersive experiences. The visual experience—the iconography, sculptures, arranged views—heightens the importance of specific elements, such as the altar, while accommodating the function of tradition, ritual, and the necessary flow of people within the environment. Sound, with emphasis on optimizing hearing, is often a consideration, with preaching and singing occurring from places of prominence. In several denominations, the burning of incense creates a deeply experiential moment through the sense of smell that heightens the meaning of certain rituals (it has the functional purpose of cleansing).

Clearly, the design of internal space contributes to a person’s perception of that space and, ultimately, their defining that space as sacred. For example, a key characteristic of the Catechesis of the Good Shepherd, a Montessori approach to teaching spirituality, is the atrium. The National Association of the Catechesis of the Good Shepherd, USA, describes it in this way, “The atrium is a place of prayer in which work and study spontaneously become meditation, contemplation, and prayer.” The arrangement of the atrium is geared toward accessibility, creating focus through the use of stripped down materials with developmentally appropriate designs arrived at through observation and experimentation, key steps in the design process.

WHAT HAPPENS WHEN SACRED SPACES ARE LOST
The question remains as to the overall impact of lost landmarks, hierarchy, and social structure on cities. The economic impact of spiritual institutions remains intact through their direct spending and the value of their programming (schools, soup kitchens, daycare, etc.) in addition to their catalyzing values such as open space, continued community development, or serving as a safety net for their communities. The Sacred Places at Risk (SPAR) study found that in 1997 urban congregations averaged subsidizing community serving programs to the tune of over $140,000 per congregation.

According to the Partners for Sacred Places,

“A network of faith-based institutions can be activated to increase the capacity of government and service organizations to access hard to reach populations. Faith-based institutions act as de-facto community centers in many of these areas, serving as a place of assembly and activity, making them natural hubs for food access, health care and nutrition education. Faith-based institutions are trusted community organizations and reach vulnerable populations with whom many nonprofits and government agencies have difficulty connecting. Congregations come with a built-in structure of volunteers and leaders, allowing service providers to quickly accelerate their work in the local community within this framework.”

Sacred spaces provide an interface between society, government, and development. Partners for Sacred Spaces goes on to say that sacred spaces are where the “epistemological and pedagogical interfaces with the cultural and theological.” While that statement clearly addresses the roles of churches’ programming, the church buildings, in their stature and often ornamentation, have the capacity to contribute to the health of the surrounding community in serving as public art.

The City Beautiful Movement of the late 1800s and early 1900s espoused the value of public art and architecture, with the belief that beauty could uplift society and encourage public engagement and attachment. While that design movement was often criticized for being frivolous, aesthetics play a key role in what attracts people to places and ultimately what creates a lasting connection. When compounded with a spiritual experience, these places form timeless anchors that should not be overlooked during the future planning or design of our civic spaces. SACRED SPACES IN A MULTICULTURAL COMMUNITY
How then, can existing and new spiritual and sacred spaces be integrated into municipalities while being sensitive to all denominations or faith backgrounds? First, inviting the public to participate is essential to any civic design process. This could lengthen the timeline of what can already be a long process, but it ensures the right sensitivity steps are taken and leverages the embodied knowledge of the community to make a more successful design. Second, while hierarchical emphasis through intentional framing of streetscapes and siting of new structures can increase the importance of certain structures, effort should be made to do this equitably and with all significant structures in mind. Third, finding common design elements across faith backgrounds, such as siting a feature at a high point within the surrounding topography or incorporating lighted elements, contributes to many groups and individuals finding their own meaning for the space.

Inclusion of spiritual spaces within civic planning is a holistic approach, purposefully integrating more facets of health that have historic precedent in establishing communities. While religion has had controversial impact on public space, from the use of public space for sacrifice to its use for communicating edicts, sacred spaces tend to be separate from that history, if only because of their universal design appeal. Indeed, any future spaces should have such intention.